By wildgirl - July 30, 2020
According to the recent study of the Global Status of Reef Sharks, Tobago supports a higher than average number of shark species. Dr Anjani Ganase asks us to take note and institute measures to protect and conserve this diversity.

A recent study on the global status of reef sharks has finally been published and confirms that reef sharks have a long history of heavy over exploitation. The study surveyed coral reefs from 58 countries around the world, including 18 in the Caribbean region. These surveys show that about 20 % of the reefs surveyed were devoid of reef shark species; these included the Dominican Republic and Colombia. Areas with lower shark numbers were more commonly associated with greater fishing pressures because of high local human population densities, as well as poor governance and management of shark fishing.
The study also revealed which factors contributed to areas with an above average number of reef sharks. These factors include regulation on the restricted use of certain fishing equipment, such as gillnets and longlines. The gillnet is made of nylon that is spread through the water column trapping anything that crosses its path. Most fish get caught by their gills as the fish tries to back out of the net. Longlines use lines towed behind the boat with a series of baited hooks. Unfortunately, both methods have a very high by-catch rate, where unintended marine organisms such as turtles and dolphins are caught as well. Additional factors that help conserve sharks are the establishment of protected areas or shark sanctuaries, as well as enforcing catch limits.

For this study, the authors used the BRUV (baited remote underwater video) system where an underwater camera is attached to a baited cage and lowered to the reef bottom. The camera then records all marine life that approaches the BRUV including sharks and rays. The method is unbiased and removes the disturbances that can be caused by human divers. The BRUV method also allows places that are not easily accessible by humans, such as deeper sites and more exposed wave environments to be observed as well.
Trinidad and Tobago was one of the countries included in the study. In 2016, Environmental Research Institute of Charlotteville (ERIC) collaborated with Global Fin Print to survey three sites across Trinidad and Tobago - northeast Tobago, Buccoo and Toco using the BRUV technology. The project was supported by the Tobago House of Assembly, Division of Infrastructure, Quarries and the Environment, who granted the research permit, and by the fisheries officers from the Division of Food Production, Forestry and Fisheries, who assisted in the fieldwork. The results of the study ranked T&T as one of the countries with the lowest probability of observing sharks. This is not a surprise as reef sharks in Tobago are a rare sight. T&T has extremely poor fisheries management in general, in addition to our culture of eating shark. As part of the global study, the outcome of the study found that Tobago, compared to the rest of the Caribbean region, has a lower than average incidence of reef sharks via the BRUVs. On average, sharks were observed 25 % of the time using the BRUVS; in Tobago they were observed only 18 % of the time.
However in Tobago, the diversity of shark species was well above average (regional average is five species, while in Tobago ten species were observed). The species observed include the Caribbean reef shark, smoothhound shark, nurse sharks, sharpnose sharks, as well as larger predators such as Tiger sharks and the critically endangered Great Hammerheads. Therefore, while low numbers were expected for T&T, the results also show that with the protection of areas and the regulation of fishing methods, Trinidad and Tobago can be a viable place for shark conservation, considering that a variety of shark species are still found on our reefs.
While some of the results are sobering, the study highlighted that areas with high conservation potential are those that implement strategies such as fisheries management and establishment of shark sanctuaries. This requires close collaboration between government agencies and community. This is especially important for Tobago as we move towards implementing the approved National Protected Areas Systems Plan! - Ryan Mohammed, ERIC
This is a comforting result when compared to my personal observations. Of the 200 or more surveys on coral reefs across 13 countries in the Caribbean done over nine months, my team only encountered five sharks. All of the sharks observed were found in marine protected areas in Belize and Bahamas. 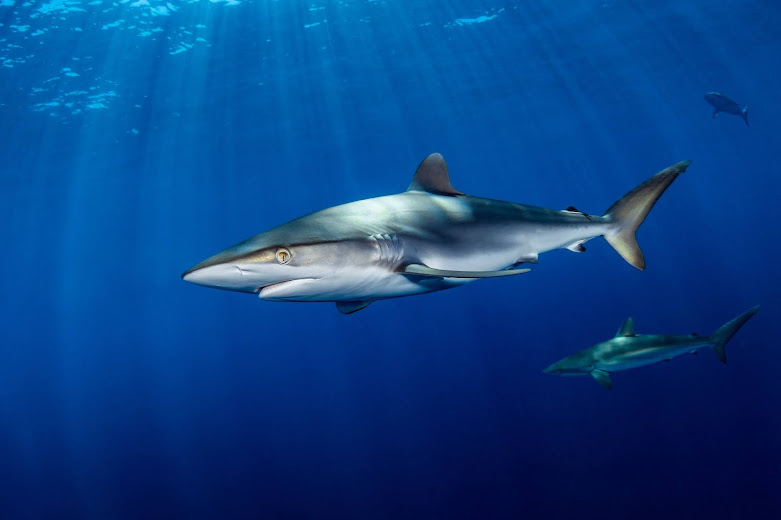 Reef sharks have really important and variable roles on coral reefs. Many of the roles vary with the species of the sharks. Tiger Sharks are an example of an apex predator that consumes large amounts of food and their prey includes marine turtles and smaller sharks; they really can eat anything that comes in their path. Conversely, Great Hammerheads feed on prey that lives close to the bottom, such as stingrays, where they use their head to pin down the ray. Both of these large shark species have very wide home ranges, roaming the ocean for over a thousand kilometres. Owing to their size, these large sharks play a role in transporting nutrients away from reefs to the open ocean.
Smaller reef shark species, such as the Caribbean reef shark and Blacktips, have relatively smaller home ranges and reside within 50 km or even less of a coral reef. The presence of these sharks on coral reefs is fundamental to the proper functioning of healthy coral reefs by restricting overpopulation of species lower down the food chain. The diet of reef sharks is quite varied. Nurse sharks and Blacktip reef sharks feed mainly on shellfish, along with squid and shrimp. Caribbean reef and Blacktip sharks target fish and stingrays. Coral reefs benefit from this top down control in the food web to prevent the overpopulation of specific species. In return, coral reefs act as nurseries for certain shark species owing to the three-dimensional complexity of the reef that aids in providing refuge.
Considering the high diversity of shark species in T&T, the development of an MPA and shark sanctuary along with regulations for the use of gillnets may drastically restore local populations. Tobago is one of the few destinations in the Caribbean where visitors can explore our coral reefs for shark encounters; another asset for marine research and tourism.
Reference:
MacNeil MA et al. (2020) Global status and conservation potential of reef sharks. Nature
See also:
https://www.nationalgeographic.co.uk/animals/2020/07/reef-sharks-are-in-major-decline-worldwide
. Anjani Ganase Newsday Tobago sharks

What’s happening at Buccoo Reef Marine Park during Covid-19 Shivonne Peters, marine scientist, advocates seasonal closure of the Buccoo Reef Marine Protected Area, for recuperation and research, and calls for stricter management practices. The current closure due to Covid-19, however, has brought another problem to light, poaching. In Trinidad and Tobago, the Covid-19 pandemic has resulted in the closure of the nation’s beaches, rivers and waterways. It was therefore no surprise when the temporary closure of the Buccoo Reef Marine Park was announced from March 24. While the reason for this closure was dictated by the government’s decision to restrict public gathering, there is another tremendously positive impact. It allows this ecologically important area to recover from years of human activities, which have led to environmental stress and degradation. After decades of overuse, misuse and an overall lack of effective management, this period of closure may b
Read more