Chasing Coral - a film for Trinidad and Tobago

By Anjani - August 17, 2018
Dr Anjani Ganase considers the lessons to be learned from the film documentary Chasing Coral. Screenings and discussion sessions are being organised by IYORTT (Trinidad and Tobago Initiative for International Year of the Reef) and secondary schools are encouraged to schedule a viewing.

Chasing Coral allows us to follow the journeys of scientists, coral enthusiasts and filmmakers to record the devastating impacts of the third global coral bleaching event along the Great Barrier Reef. Chasing Coral documents the process of coral bleaching and extent of damage to the marine life that depend on these corals; and by extension the livelihoods sustained by this crucial ecosystem through coastal protection, food, income and recreation. Although much of the story is set in Australia, Chasing Coral tells of the dangers of losing coral reefs and the impacts on island nations, anywhere.

Here are a few questions that people have asked the IYORTT team about coral bleaching and climate change:

1. What is the future outlook for Caribbean coral reefs with regard to climate change?

Caribbean reefs already have a long history of degradation from decades of over exploitation and damage because of land clearing, pollution and misuse. Many Caribbean reefs have also experienced bleaching because of heat stress events in the past 40 years. Future trends predict not only more frequent and severe bleaching events; other impacts of climate change, such as severe hurricanes and sea-level rise, also threaten coral reefs and the communities that depend on them. The future of Caribbean coral reefs relies on (1) efforts to protect the reefs from continued local disturbances and (2) efforts to push for climate change policies to be top priority at national and regional levels. Even if we curb our carbon emissions today, we will continue to feel the residual effects of global warming until the climate is stabilised. We need to limit the added stress of local disturbances to give the coral reefs the best surviving chance.

2. How have the coral reefs of Tobago fared over the years?

The story of Tobago’s coral reefs is similar to many others in the Caribbean. During the 1980s, a region-wide die off of branching corals to disease also impacted coral reefs of Tobago. Years of declining water quality and unregulated fishing leave most Tobago reefs, especially those in the southwest side of the island, in a degraded state. Tobago reefs have been impacted by two major bleaching events (2005 and 2010); but fortunately were not impacted by the last bleaching event. Our location at the end of the island chain means limited connectivity with the rest of the Caribbean for reseeding; however, there is some local reseeding following a disturbance. This makes the recovery process limited and slow.

3. Don’t Caribbean countries have more important issues when it comes to protecting coral reefs, such as over fishing and pollution, than climate change?

No action against climate change will result in wasted efforts in the actions taken to protect against local disturbances. Efforts to combat climate change should not take away from local efforts to manage and protect coral reefs; especially as climate change will impact all ecosystems, including human ecosystems. Our endeavours require behaviour change and policy change and enforcement across all sectors and at all levels (community, national, regional and global).

4. As climate change is making the tropics too hot, doesn’t that mean there are other cooler places (at higher latitudes) that will now be able to support coral reefs?

Temperature is not the only factor that determines what can survive where. Furthermore, the impacts of climate change are global and are impacting all ecosystems. Where corals have been observed growing along more temperate coastline, they’re not entering uninhabited spaces. Temperate ecosystems are also vital and being impacted by climate change.

5. Coral reefs have been around for thousands of years and have survived warmer climate condition in the past. What is the difference now?

Coral reefs have survived the five previous mass extinctions and changes in the climate, but it took them millions of years to recover. This is not a scale that is relevant to the livelihood of humans who depend on these ecosystems. The temperature history of the planet extends over millions of years; but humans are drastically and rapidly changing the climate within hundreds of years. Coral reefs may return a million years from now, but their survival today is crucial for our livelihoods and the next generation’s.

6. Scientists are working on building corals to become more resilient to warming temperatures, through assisted evolution of the coral and its symbiotic algae. Isn’t this a good solution?

Scale is important to consider here, this time, spatial scales. These experiments, while they are important in their own right to understand coral evolution and physiology (especially when considering the worst case future scenario), are only being carried out on small scales in controlled lab environments or reef areas with a few coral species. These experiments often focus on one or two factors in the environment rather than the full range of impacts (biological, physical and chemical) that occur in the real world. It will be a long, tedious and expensive road ahead before these trials can be scaled up to a viable global solution, one that considers the thousands of different factors and the millions of combination of environments globally. This would be the most desperate way forward. The coral reef scientific community is unanimous that the best solution to save coral reefs from climate change is to curb carbon emissions.

7. Is there anything that can be done to stop coral bleaching?

There have been experiments and theories working on mitigation methods for curbing coral bleaching when it gets too hot. Some of the ideas include cloud manipulation, underwater circulating fans and even a giant shade cloth to reduce solar heat. But again, none of these solutions consider the variety of other factors we encounter in nature. Coral reef ecosystems house 25 % of the ocean’s marine biodiversity and the diversity of this ecosystem needs to be considered when applying any tactics. Long-term systematic change in our behaviour is truly the best way to save the reef from future coral bleaching events.

8. What can an individual do?

The problem of climate change is an overwhelming one for an individual, when considering the tasks to engender change at the global level. Climate change and many other environmental impacts are related to our excessive reliance on oil and gas, including plastic pollution (a product of oil and gas). No doubt oil and gas has advanced civilization, but we need to quickly adapt and move on; we already have the knowledge and the technology to do this, but what we lack is the will power to change behaviour.

We have never been more connected as individuals in a global community, and have seen great strides in behaviour change through individual actions that quickly trend. We can act collectively on behalf of coral reefs, and all ecosystems that are important to us. A challenge: Understanding that training is needed before an activity becomes second nature, let us start with one day a week dedicated to being environmentally active. Remember the importance of scale: integrate small, short-term actions (limit plastic use, recycle etc) with broader, long-term goals such as reducing your carbon footprint in your home and business. Finally, let your voice be heard at all levels, it is as easy as clicking a “like.” 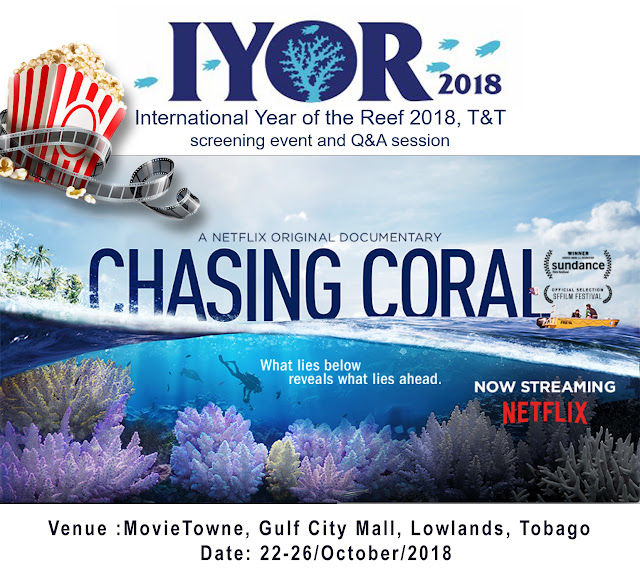 According to the recent study of the Global Status of Reef Sharks, Tobago supports a higher than average number of shark species. Dr Anjani Ganase asks us to take note and institute measures to protect and conserve this diversity. A recent study on the global status of reef sharks has finally been published and confirms that reef sharks have a long history of heavy over exploitation. The study surveyed coral reefs from 58 countries around the world, including 18 in the Caribbean region. These surveys show that about 20 % of the reefs surveyed were devoid of reef shark species; these included the Dominican Republic and Colombia. Areas with lower shark numbers were more commonly associated with greater fishing pressures because of high local human population densities, as well as poor governance and management of shark fishing.  The study also revealed which factors contributed to areas with an above average number of reef sharks. These factors include regulation on the restricted use o
Read more

What’s happening at Buccoo Reef Marine Park during Covid-19 Shivonne Peters, marine scientist, advocates seasonal closure of the Buccoo Reef Marine Protected Area, for recuperation and research, and calls for stricter management practices. The current closure due to Covid-19, however, has brought another problem to light, poaching. In Trinidad and Tobago, the Covid-19 pandemic has resulted in the closure of the nation’s beaches, rivers and waterways. It was therefore no surprise when the temporary closure of the Buccoo Reef Marine Park was announced from March 24. While the reason for this closure was dictated by the government’s decision to restrict public gathering, there is another tremendously positive impact. It allows this ecologically important area to recover from years of human activities, which have led to environmental stress and degradation. After decades of overuse, misuse and an overall lack of effective management, this period of closure may b
Read more